Luke Skywalker is a minifigure introduced in 1999 as part of the Classic Star Wars line. He is the main protagonist of the original trilogy. Luke is also the son of Anakin Skywalker and Padme Amidala and the older twin brother of Leia Organa, the main protagonist of the prequel trilogy. He is the first ever licensed minifigure and has had 29 versions made since 1999.

Luke Skywalker was the son of Queen/Senator Padme Amidala of Naboo and Jedi Knight Anakin Skywalker (later Sith Lord Darth Vader) of Tatooine, and twin brother of Leia Organa. When his Mother died (of injuries caused by Anakin) after giving birth to him and Leia, he was taken to Tatooine where he lived and grew up on his Aunt Beru and Uncle Owen's Moisture Farm on Tatooine for the next 19 years of his life. He owned a Landspeeder, and is known to have raced T-16 Skyhoppers with his best friend Biggs Darklighter. He and his uncle later purchased two droids which were R2-D2, and C-3PO. After Owen and Beru were killed by the Empire's Stormtroopers, he went with former Jedi Master Obi-Wan Kenobi, who told him his father was a Jedi Knight, and gave him his father's lightsaber. After Obi-Wan's death at the hands of Luke's father Darth Vader, Luke helped destroy the Death Star, with the help of Han Solo, Chewbacca, Princess Leia, R2-D2, C-3PO, and all of the Rebel Alliance in the Battle of Yavin and became a known leader in the Rebel Alliance. He then helped in the Battle of Hoth but the Empire forces outmatched the Rebels and the Rebels scattered across the galaxy, eager to escape the Empire's attack. He flew to Dagobah and was trained by Jedi Master Yoda. His training was interrupted when Luke set off to Bespin to save his friends, and Han Solo was frozen in carbonite. When dueling with Darth Vader, the Sith Lord cut off Luke's right hand, and he lost his lightsaber along with it. It was then that Darth Vader revealed to Luke that he was his father. Luke escaped, and after going to other adventures, he created his own green lightsaber. He went back to Tatooine to save Han Solo from the hands of Jabba the Hutt. Eventually, Luke visited Yoda on Dagobah again but while there, Yoda died of old age. Soon Luke dueled his father again on the second Death Star above the forest moon of Endor, and though he defeated him, he refused to finish him off, knowing it would turn him to the dark side. The furious Darth Sidious unleashed his Force lightning upon Luke. Because of this, his father came back to the light side and threw Sidious into the core of the Death Star, killing him and saving Luke. However, Anakin's suit was badly damaged by the Force lightning of the Dark Lord and he soon died in Luke's hands. Luke burned his father's remains in a fire in a Jedi tradition, but later saw Obi-Wan, Yoda, and his redeemed father Anakin Skywalker as Force spirits.

He later trained Ben Solo, Han and Leia's son but went into hiding after he turned to the dark side. Later he was located by the Resistance and visited by Rey who returned his father's lightsaber, original thought lost at Cloud City but later obtained by Maz Kanata. Although reluctant at first. He agrees to train Rey and when she leaves to help the Resistance. He confronts Kylo Ren on Crait through a Force projection and fights him. He dies from the projection and becomes one with the Force. 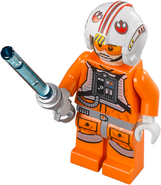 2013 Pilot Luke with Goggles on

2013 Luke Skywalker from the Rancor Pit 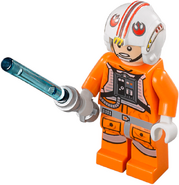 Luke from the Desert Skiff.

Luke from the Wampa's Cave.

Luke without the helmet in the Millennium Falcon.

Luke in his old pilot variant. 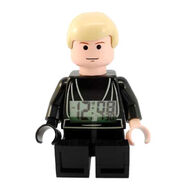 Luke as a clock.

One of the newest forms of Luke's Jedi variant. 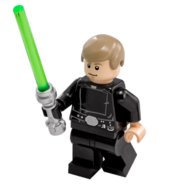 Luke as a stormtrooper in disguise.

Luke in his Training/ Dagobah clothes.

A second variation of Ceremonial Luke was made with added pupils. 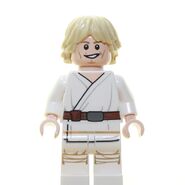 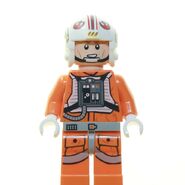 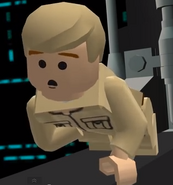 Luke when he lost his hand.

Luke in the promotional image for LEGO Star Wars II: The Original Trilogy. 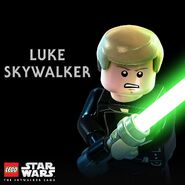