Lundor is a Legends of Chima Minifigure released in summer 2014. He is a historian for the Fire Tribes. He is a nomad, but thinks there are more leopards somewhere. He is a close friend of Tormak and, as stated in one mini movie, he was a member of the Tunneler Cats, but somehow survived. 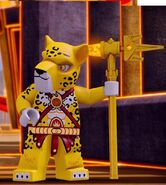