Brickipedia
Register
Don't have an account?
Sign In
Advertisement
in: Class 2 articles, Minifigures introduced in 2012, The Lord of The Rings minifigures
English

Lurtz is a minifigure from the theme The Lord of the Rings released in May 2012. His minifigure is exclusive to the set 9476 The Orc Forge. He also appears in 50011 The Battle of Helm's Deep as a microfigure.

Lurtz is brown and grey with muscle printing on his chest. His "skin" is made to look as if it were slimy or covered in a glutinous substance, just how he had been after being created in the Orc Forge. His head is double-sided. On one side, His eyes are large and yellow with grey rings around them. The right eye is larger than the left one, however, giving him a rather deranged appearance. His teeth are clenched and bared in a snarl. On the alternate face the eyes are the same size and are wide open. A splash of white in the shape of a hand spreads out over the face, from the forehead to the cheekbones. Strangely, his teeth are a light beige, while in the movie they are a discoloured mix of black, brown and yellow. Another differing feature from the movie is that Lurtz has black hair that goes all down his back. The mouth is open and the teeth bared in a roar. Lurtz has grey hips and brown, unprinted legs and arms. He also has a double sided head.

Lurtz was the first of Saruman's Uruk-hai to be bred and was their leader at the time of the attack on the Fellowship of the Ring at Amon Hen. He carried an Uruk-hai sword, bow and shield into battle with armour, but did not wear a helmet. He slew Boromir in battle, piercing him in the torso with three arrows. After fatally wounding Boromir, he engaged in a sword fight with Aragorn and was killed when Aragorn decapitated him. Lurtz's first officer, Uglúk, then took command of the company of Uruk-hai. 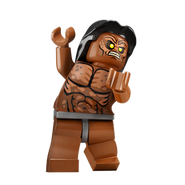 Physical Lurtz at the Toy Fair

Lurtz with his alternate face 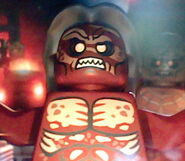 Deutsch Français Nederlands
Community content is available under CC-BY-SA unless otherwise noted.
... more about "Lurtz"
RDF feed
Accessories
Sword +
Appearances
9476 The Orc Forge
50011 The Battle of Helm's Deep +
ArticleRating
2 +
Image
lor025.jpg +
Img1
Lurtz_regular_minifigure.jpg +  and 150px-Lurz1.png +
Img2
Lurtz_Microfigure.jpg +  and 150px-Lurz2.png +
InfoboxTemplate
Minifigure +
ShopDescription
Lurtz Commander of the Uruk-hai Arm … Lurtz</br></br>Commander of the Uruk-hai Army, the most powerful of all Uruks.</br>Lurtz was the first born from the first batch of Uruk-hai. Not only is he stronger than any other Uruk-hai, he is also smarter. And that is always a dangerous combination. He feels no pain, only rage. combination. He feels no pain, only rage. +
Theme
The Lord of the Rings +
Title
Lurtz +
Txt1
Regular +
Txt2
Microfigure +  and Newborn +
Variations
See also: Uruk-Hai +
Years
2012 +
Advertisement