M:Tron (incorrectly called M-Tron) is a subtheme of the LEGO Space theme and started after Futuron in 1990 and lasted until 1993 along with Blacktron.

In an effort to increase interactivity, LEGO introduced magnets in the next Space theme, M:Tron. After the introduction of Space Police, M:Tron was probably conceived as the space equivalent of a fire brigade, although in the United States the theme has been marketed as a mining faction, even changing the names of the sets for the American audience to reflect this. Vehicles in this set, distinctive for their red hulls, gray trim and neon-green canopies, are devoted primarily to repair and rescue operations. They often featured crane-like attachments with magnets for picking up small cargo and tool boxes. These boxes, unfortunately, were generally not interchangeable.

M:Tron was the first major Space theme that did not include a base of any kind; all sets were vehicles.

M:Tron was also the last space theme to carry the LEGOLAND banner. LEGO System was the name used starting in 1992.

Red and black bricks is what defined the M:Tron. The transparent windshields and windows were trans-neon green.

M:Tron was the first theme to use magnets in their sets to hold containers, vehicles and parts together.

The minifigures shared the exact same uniform - white legs, red torso with an M logo, white arms, and a black helmet with trans-neon green visor. The M:Tron also had robots, most notably in the Particle Ioniser.

Many of the spaceships and vehicles carried smaller land or air based craft. Mainly of the four wheeled vehicles had a magnet on it to allow for attachment and pickup with a bigger M:Tron spaceship or vehicle.

The M:Tron, along with the Blacktron, showed weapons only in the form of vehicle based or the "loud-hailer" utensil parts.

The M:Tron were depicted and described as a rescue and repair faction in all catalogs except for the United States versions, where they are introduced as a mining faction. M:Tron astronauts possess many tools such as hammers, spanners and fire hoses, and are often seen helping Futuron and repairing their vehicles. The Lego Idea Book 260 has instructions for what appears to be an M:Tron ambulance, carrying a Futuron astronaut. The M:Tron were peaceful except when encountering their opposite, Blacktron Future Generation as depicted in this 1991 catalog picture. The Blacktron faction aims to steal the M:Tron's advanced technology.

The M:Tron had no base units, only large space ships such as the 6956 Stellar Recon Voyager and 6989 Mega Core Magnetizer. 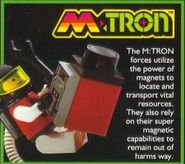 Proof that the title is M:TRON not M-Tron.

A prototype M:Tron scrapped by the LEGO Company.

A prototype version of M:Tron. 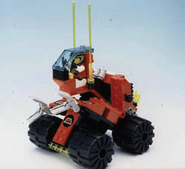 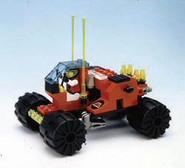 The vehicle with cockpit lowered. 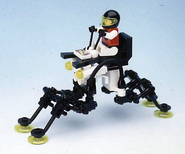