"I am M.O.D.O.K! The ultimate human machine interface and, more importantly,... THE LAW!"
―M.O.D.O.K. in LEGO Marvel Super Heroes 2

M.O.D.O.K. is a Marvel Super Heroes minifigure that appeared in 2014.

M.O.D.O.K. has a new large warm gold head mould depicting his dark brown hair, a purple headband with a red jewel in front, the front also has a large screen featuring a light nougat face with white eyes, wrinkles and a mouth all bent into an angry expression. He has a plain gold torso and purple limbs.

M.O.D.O.K. is the leader of AIM and a recurring enemy of Captain America along with Iron Man and Hulk.

George Tarleton was a minor technician working for the criminal weapons/science organization known as Advanced Idea Mechanics (A.I.M.). George was part of the team which created and studied the super-weapon known as "The Cosmic Cube" and to further their research, George was forced to be biologically altered into "M.O.D.O.C.", a living super-computer and "Mental Organism Designed Only for Computing". MODOC's head however became to large and malformed for his increasingly withered body to support so he was integrated into a hover-chair known as "The Doomsday Chair".

Corrupted by his new cold, computer-like intelligence and lust for power, MODOC turned against his former masters took over A.I.M., renaming himself MODOK, "The Mental Organism Designed Only for Killing". As MODOK, George was a cruel and merciless leader with a vast intellect which he used to assist villains like Red Skull and General Ross destroy their heroes.

MODOK is a boss in the level "That Sinking Feeling" where he fought Iron Man, Spider-Man, and Thor on Loki and Dr. Doom's submarine.

At the beginning of the duel M.O.D.O.K. is invincible - so fight with his minions for some time and wait for the malfunction of the enemy's shield. When it occurs, switch into Thor and throw your hammer at the villain, so you can hit him during conventional melee fight. After first hit, the criminal will jump to the water - so you must spend some time struggling with his troops.

Notice that the whole sequence described above must be repeated for three times - only then the talking head will be finally vanquished. 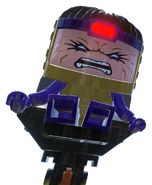 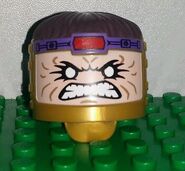