George "Mac" McHale was a former friend of Indiana Jones who then turned against him, turning to Irina Spalko for large amounts of money. Mac is also a playable character for the three parts of "The Kingdom of The Crystal Skull". Mac attacks by use of his pistol, but in the DS version, he wields a shovel.

First, after an artifact was missing from the museum, Mac and Indy are seen rushing to the call of the caretaker, and are directed to find said artifact. Sometime later as the duo arrive to the location via train, Indy is seen to be digging a pit while Mac unwittingly blows a trumpet attracting the attention of Colonel Antonin Dovchenko and his men, thus resulting in them both being captured and taken to an area known as Hangar 51, or Hangar Havoc.

It is here that the two men are forced by Irina Spalko to find the box with alien remains inside the huge hangar containing many boxes. After hours of puzzle solving, the two do successfully find the box and when Mac accepted a huge sum of money, this is where Mac's true flag was flying, and he even held Indy at gunpoint. After Indy manages to escape alongside his new broom-wielding ally, the Janitor, the two escape from Spalko, Dovchenko, and the enemy forces. After this, Mac is not seen again until the "Kingdom Of The Crystal Skull Part 2" hub in the fighting level, Mac Attack.

In the second part of the Crystal Skull hub, Spalko successfully steals the Crystal Skull from Indy and his band, sends out her soldiers to attack the crew, and once they were defeated, Mac and Indy finally meet again, and just like the results were for the soldiers, Mac was easily subdued by Indy. This causes Spalko ditch him at the Peruvian Campsite, Mac again returns to the side of Indy and his friends. 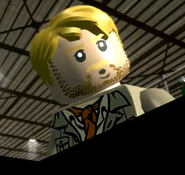 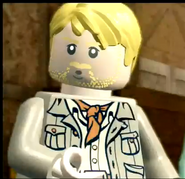 Mac about to betray Indy

Mac with Spalko and Indy 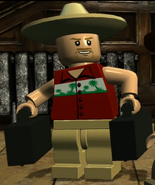