Macnair is a Death Eater who appeared in LEGO Harry Potter: Years 1-4. After Lord Voldemort's downfall, he turned to the Ministry and took a job executing beasts. He was Buckbeak's would-be executioner, but Harry and Hermione saved the Hippogriff just in time. He was placed in Azkaban for practicing the dark arts and following Lord Voldemort. He was also present at the graveyard during Harry's fourth year.

In 2019 he made his first physical minifigure appearance. 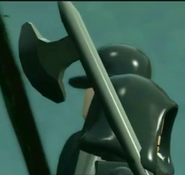 A close-up of Macnair and his Axe