The Magician is a minifigure from 8683 Minifigures Series 1. He comes with a wand and an additional hair piece that can be interchanged with his top hat.

The magician has black legs, hips, torso and arms. His torso depicts a white button-up shirt and red belt, bow tie and handkerchief in his pocket, and a black suit jacket. He has black eyebrows, a curly blab I moustache, a slanted smile and a black goatee beard. Two exchangeable head gear pieces are included for the magician: a black top hat and a hair piece. He has one accessory: a black wand with white strips at the ends. His flesh tone is yellow, but his hands are white to imitate white gloves.

In an animation, he was one of the contestants who tried to hit a target on a Dunk Tank to knock Deep Sea Diver into the water. He released a bird from his wand to hit the target, but it missed.

In The LEGO Movie he is part of MetalBeard's crew. In the flashback of how they tried to infiltrate the Octan Tower, he and the others were captured by some Laser Sharks. Oddly enough, Magician appeared in Cloud Cuckoo Land as a Master Builder which is strange. This could either be an animation error, he survived and escaped, or this is a different Magician. Emmet is also seen briefly dressed in his clothes when getting ready to start the day. 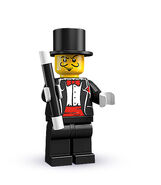 The Magician with his hat off

Emmet dressed in the Magician's clothes

The Magician as part of MetalBeard's crew in The LEGO Movie

Deutsch Français
Community content is available under CC-BY-SA unless otherwise noted.
... more about "Magician"
RDF feed
Accessories
Wand (Black) Top Hat (Black) +
Appearances
8683 Minifigures Series 1 +
ArticleRating
2 +
Image
RM1.jpg +
InfoboxTemplate
Minifigure +
ShopDescription
“Hey presto, allez-oop – and it’s gone! … “Hey presto, allez-oop – and it’s gone!”</br></br>Appearing out of nowhere with a flourish of his cape and a twirl of his elegant, curly moustache, the mysterious Magician is the ultimate in stylish showmanship. He loves a good audience to appreciate his incredible and sense-defying magic tricks, but watch out – not only is he an amazing performer, but he’s also a talented prankster as well! He’ll confuse, bewilder and amaze with a mix of sleight-of-hand and impossible feats, and the more surprised his audience is, the better.</br></br>Whether he’s making a flock of doves fly out of his wand or pulling a giant rabbit out of his magic hat, the Magician is always ready to put on a spectacular show…right up until he vanishes without a trace in a flash of lightning and a puff of smoke! a flash of lightning and a puff of smoke! +
Theme
Minifigures
Series 1 +
Title
Magician +
Years
2010 +
Advertisement