MagnaGuards are LEGO minifigures based on the Star Wars droids formally named Self-Motivating Heuristically Programmed Combat Droids, or more commonly, IG-100 MagnaGuards. They have only appeared in two sets, both coming in pairs.

These droids were the bodyguards of General Grievous, modelled after the elite guards that protected him while he fought in the endless wars against the Huk on Kalee and were skilled in using an electrostaff. Others are often seen guarding important Seperatist areas, planets, and bases. They are tough opponents in battle, not only because of their electrostaffs, but also because of their extensive backup systems, allowing them to fight even after being decapitated by using a backup pair of photoreceptors in theirs chests.

Front and back of the Magnaguard. 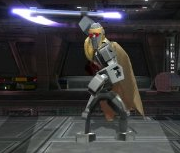 A MagnaGuard in LEGO Star Wars III: The Clone Wars.