He is the leader and founder of the Brotherhood of Mutants, which also includes Mystique, Juggernaut, Pyro, Toad, Mastermind, Blob and Sabretooth and is often pitted the X-Men. Even though he is mostly a villain, there are occasions when he became a hero and teamed up with the X-Men to prevent the eradication of mutant kind. For a time he once even became Headmaster of Xavier's School to honor his old friend dying wish to keep the school open. 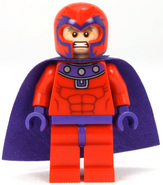 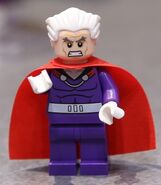 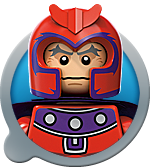 Magneto escaping Ryker's Island
Add a photo to this gallery

Retrieved from "https://brickipedia.fandom.com/wiki/Magneto?oldid=1648035"
Community content is available under CC-BY-SA unless otherwise noted.