Magpie is a DC Comics minifigure who first appeared in The LEGO Batman Movie.

Museum curator Margaret Pye, obsessed with the shiny museum jewels she couldn't own, became Magpie, a jewel thief who always leaves something in place of the stolen jewels, just like her namesake bird, though the things she left were booby-trapped. Her defeat came at hands of the teamwork of Batman and Superman in the same night the heroes met each other.

Margaret Pye has always loved shiny things, especially ones that belong to other people. That’s why she became the villain Magpie and dedicated herself to stealing anything shiny that caught her eye. Whether it’s valuable or junk, she wants it all to decorate her glittery nest of a lair. Watch out for her explosive temper if you get between Magpie and her latest prize! Bat-Fact: Loves diamonds almost as much as balls of tin foil. 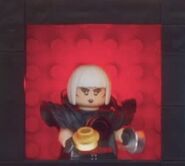