Majisto was the first physical minifigure depicting a wizard (though a character simply called "the wizard" previously appeared in Captain Indigo comics in 1984), and as such introduced several new LEGO elements, such as the beard, the pointed hat and a glow-in-the-dark magic wand with a star-shaped tip.

Majisto's torso piece was a blue coloured variant of the Forestmen leader's green shirt with the black belt and the small (money) bag. On his back he would typically wear a short black cape. His standard smiley face head was accompanied by the new beard piece and the new pointed hat, colored in blue. 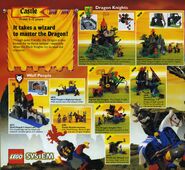 A page from a 1993 large UK catalog identifying Merlin and his dragon Ogwen
Add a photo to this gallery
Retrieved from "https://brickipedia.fandom.com/wiki/Majisto?oldid=1865358"
Community content is available under CC-BY-SA unless otherwise noted.