Brickipedia
Register
Don't have an account?
Sign In
Advertisement
in: Class 4 articles, Spyrius, Minifigures introduced in 1994,
and 2 more

Major Kartofski is a droid Minifigure from the Spyrius theme.

Major Kartofski has black arms and bright red torso, legs, and hands. His torso, hips, and legs feature detailed robotic printing. His black head is printed with a robot face and circuitry, and he wears a transparent Mini Crash Helmet.

In US Shop At Home catalogs, this minifigure is generically referred to as a "droid" and is not given a specific name. A TV commercial simply calls him "the Spyrius agent".

LEGO catalogs in the UK referred to set 6939 Saucer Centurion as "Spyrian Sovek with Major Kartofski". Additionally, the Summer 1994 issue of Bricks 'n Pieces magazine included a short story that again referred to "Major Kartofski and his Spyrian cohorts". This led to some confusion as to who Major Kartofski was, since the mustached Spyrian minifigure unofficially dubbed by fans to be the "Spyrius Chief" is not in set 6939, which only includes the clean-shaven Spyrian astronaut and droid.

The Spyrius droid was featured very prominently in all advertising for the theme, and was shown commanding raids on Unitron in a TV commercial and small comic in catalogs of the time (which even specifically showed him in command over a Spyrian, who was piloting a larger robot mech). Additionally, the UK catalogs tended to name a single character from each Space theme, and then use that character as a representative of the theme next to the theme's bios: Space Police was represented by Captain Magenta, Ice Planet 2002 was represented by Commander Bear, and Spyrius was represented by the Spyrius droid. All this makes it highly likely that Major Kartofski is the name of the Spyrius Droid in the UK.

Another magazine, LEGO Club Innovations, gave a slightly different backstory for Spyrius than Bricks 'n Pieces. In this story, the droid is "sent by the Spyrius spies", implying it is not the commander. However, the rank of Major could still suggest that the droid reports to a higher authority (potentially the still-unidentified "Spyrius Chief") while commanding the lower-ranking operatives.

LEGO Legacy: Heroes Unboxed unambiguously refers to the droid as Major Kartofski, finally providing an official confirmation on the droid's identity. While this is accepted as an official LEGO source, it should be noted that LEGO Legacy often derives its more obscure facts from fan websites including Brickipedia, sometimes leading to the game quoting inaccurate information (such as claiming that Kartofski himself makes a cameo in a Space Police III video, which was previously stated by this Brickipedia article). Therefore, LEGO Legacy may be basing the name upon the information previously stated in this article rather than a direct source from LEGO's marketing.

From Station Xenolith 6 on Planet Spyrius, Major Kartofski and his Spyrian cohorts control the Spyrius robot army as they plot to terrorize the United Galaxies. As seen in comics and a TV commercial, Major Kartofski often operates in the field, spying on Unitron activities and radioing his fellow Spyrians to begin their raids. However, he is often frustrated by the incompetency of the larger Spyrius robots, ultimately leading him to take action himself.

According to LEGO Club Innovations, Major Kartofski's "magic helmet" lets him turn invisible, except for his red hands. This causes trouble for the Space Police trying to arrest the Spyrius spies.

In LEGO Legacy: Heroes Unboxed, Major Kartofski is an Explorer support unit with the abilities "Cheat Code Applied", "EMP Bomb", "Scan for Weaknesses", and "Cloak Matrix". In fitting with his spy motif, most of his abilities are centered around the Stealth effect. He is usually unlocked through the Master Shop, which requires Master Tiles from max-rank heroes, although his codex tiles may also be temporarily offered through Timed Quests and the Event Store.

According to his LEGO Legacy character profile, Major Kartofski is an infamous spymaster who trusts no one, and is even willing to wipe his own hard drive when he is suspicious of himself. Few know his name, and due to his spy network, he is aware of anyone who does know his identity.

Portions of a 1995 UK catalog, with the name "Major Kartofski", faction bios, and comic

The story in Bricks n Pieces

The story in Bricks n Pieces

The story in LEGO Club Innovations 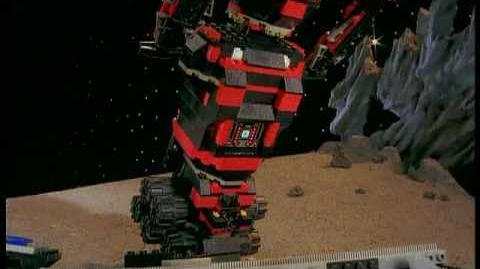