"Nothing quite like the thrill of chasing monsters, ey wot?"
―Major Quinton Steele

Major Quinton Steele is a minifigure introduced in the Monster Fighters theme in 2012. He appears in two sets: 9463 The Werewolf, and 9466 The Crazy Scientist and His Monster.

Major Quinton Steele has tan legs printed with a holster, some teeth on a ring, and a belt on the hip. His tan torso is printed with many pockets, as well as an ammo belt and a scrap of parchment. His face is yellow, and is printed with a white mustache and a green telescoping eye. He wears a white pith helmet, like that worn by Dr. Kilroy. He has a gun called the blunderbuss. On the back of his head, there is a small print, some neck baggage, which is colored in a flame, yellowish orange shade.

Major Quinton Steele is an old-fashioned hunter who has an eye for exotic prey, such as the Werewolf. He first met Dr. Rathbone when he was searching for a new hunting challenge. He is armed with valuable rare weapons which appear in both of his set appearances. 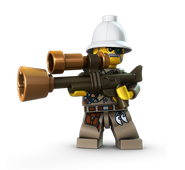 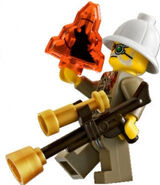 Quinton with the Werewolf Moonstone

Poster from Lego.com
Add a photo to this gallery
Retrieved from "https://brickipedia.fandom.com/wiki/Major_Quinton_Steele?oldid=1846069"
Community content is available under CC-BY-SA unless otherwise noted.