"Darkness returns, Asgardian. Have you come to witness the end of your universe?"
―Malekith in Thor: The Dark World

Malekith the Accursed is the leader of the Dark elves, a race of elves that formed from darkness. He created a red liquid known as the Aether(pronounced ee-ther) which was capable of ultimate destruction. Thousand of years ago, they tried to plunge the universe into darkness at the Convergence (where the Nine Realms align and passage to each one instantly is possible), but they went into hibernation after Thor's grandfather Bor defeated them and the Aether was locked underground. They remained asleep until the Aether was accidentally discovered by Jane Foster. Malekith injected part of the Aether into Algrim the Strong, one of his greatest warriors, turning Algrim into Kurse. The Dark Elves ambushed Asgard to get the Aether (which was in Jane Foster's body). Malekith battled Thor while Kurse freed some prisoners. Thor struck half of Malekith's face with lightning after Malekith killed Thor's mother Frigga. The Dark Elves retreated to the Dark World, but Thor and Loki followed. Malekith stripped the Aether from Jane and made his way to Midgard(Earth). He used the Aether to try and complete what he started years ago at the Convergence on Earth. Thor managed to find him and destroy the Aether and finally defeat Malekith and his army. 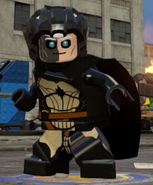