Mama Brickolini is the adoptive mother of Pepper Roni and wife of Papa Brickolini who appears in all three LEGO Island games.

Mama Brickolini wears a white apron, chef hat, and white pants in LEGO Island. In LEGO Island 2 and Island Xtreme Stunts her only apparel difference is that she wears black pants. Her hair also switches from black in LEGO Island to brown in the FMV for LEGO Island 2.

According to the LEGO Island manual, Mama's ancestors invented music. It is also then stated rumors suggest her maiden name was Clickoff, which is the name of the Royal House of Buildovia. Her character cutscene in the Information Center also establishes that a boat took her and her piano to LEGO Island, where she met Papa Brickolini whom she later married, and opened the Pizzeria. They also adopted Pepper after Bologna Roni disappeared.

In the main game she is a playable character and can make plants and character sing. When she is not being played as she can be found at her piano near the Pizzeria and Papa. It is established she is nearsighted and has excellent hearing.

When the Brickster escapes jail she rushes to the jail to tell Pepper that she heard the Brickster fly the police helicopter towards the residential district.

In the Playstation and PC ports of LEGO Island 2 she can initially be found at the Pizzeria. Later in the game the Brickster kidnaps her and Papa, in which he takes them to OGEL to make pizza for him. Pepper then goes to OGEL and helps make pizza to put the citizens of OGEL to sleep so Mama and Papa can escape. In the closing cutscene Mama can be seen landing on LEGO Island in the Brickster's Fish Ship and dancing with Papa during the closing celebrations. In the Gameboy Color port she can only be found at the Pizzeria.

In Island Xtreme Stunts she can be found once again at the Pizzeria, where she asks Pepper to deliver pizzas after he finds Papa's missing hat. She can also be seen in the closing FMV for the game, where the Brickster squeezes by her in the theater. 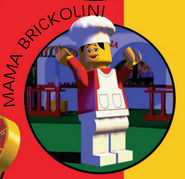 Mama Brickolini in the manual for the first LEGO Island game

Several designs for the main characters of LEGO Island, including Mama Brickolini

Mama's family history according to an internal LEGO Media document