This article is about the Batman Minifigure. For the Monster Fighters minifigure, see Manbat.

"Doctor Kirk Langstrom, AKA the Man-Bat, was an expert in mammalian biology who tested a serum on himself to try to cure his growing deafness. Unfortunately, the serum turned him into a man-sized bat, making him super-strong and giving him the ability to fly."
―Character introduction in LEGO Batman: The Videogame

Man-Bat reuses the Manbat hairpiece (with dark tan highlights) and torso with wings in a lighter reddish brown. His head is printed with eyebrows, red eyes, and a large grin showing his fangs and a second face bent into a scared expression. The torso is printed with muscles and a large patch of dark tan chest fur. The back is printed some dark tan fur at the top and the back muscles. He has dark blue unprinted legs.

Man-Bat has a never before released Reddish Brown Bat-Ear piece for headgear, a reddish brown Minifigure head which depicts a bat's face with Red eyes and White fangs. He has a Black and Brown Bat-wing back accessory which allows him to glide. Man-Bat's torso is also Reddish Brown and depicts a furry male torso. His legs are Blue.

In LEGO Batman: The Videogame, Man-Bat has super-strength and is able to glide on his wings.

He reappears in LEGO Batman 2: DC Super Heroes and his appearance is similar, but his pants are now darker in colour and ripped. He is able to fly, rather than glide, has super strength, and can break glass by emitting sonic screams.

Dr. Kirk Langstrom tested a serum based on bats' echolocation abilities on himself to try and cure his growing deafness, but it actually transformed him into a savage minded man/bat hybrid. In Man-Bat form, Kirk's control of his body greatly weakened as his mind was consumed by primal animal instincts which also polluted Kirk's human mind by amplifying his darkest and most savage traits causing him to come into conflict with Batman.

In LEGO Batman: The Videogame, Man-Bat was a boss on the level Zoo's Company. After completing the level, he is unlocked for purchase.

Man-Bat was a part of The Penguin's team, which also consisted of Bane, Killer Croc, and Catwoman. The team planned to unleash an army of Penguin Minions on Gotham City.

Man-Bat waited with The Penguin and Catwoman for Batman and Robin to arrive at the zoo so they would know when to set up the satelite which would control the Penguin Minions. When the Dynamic Duo arrived, Penguin and Catwoman rushed off to the Arctic exhibit, knocking Man-Bat back into the hole of the boat they were on.

Man-Bat was discovered and defeated by Batman and Robin and was sent back to Arkham Asylum.

In the console versions of LEGO Batman 2: DC Super Heroes, Man-Bat is one of the escapees in the massive Arkham Asylum breakout. He can be found near at the top of Gotham Cathedral and, after being defeated, is available to purchase for 500,000 studs.

In the portable versions, Man-Bat plays no role in the story, but his minikit can be found on the level Gotham Metro. He costs 80,000 studs.

Well-meaning zoologist Dr. Kirk Langstrom was trying to cure deafness when he gave himself an injection of bat DNA. Instead, the experimental serum transformed him into a creature that was half-bat and half-minifigure, giving him wings and extra strength, but the mind and instincts of a wild animal. When on the loose, he can still be a real pest to Batman and the citizens of Gotham City. Bat-Fact: Batman has some concerns about brand-name confusion. 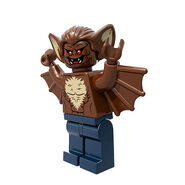 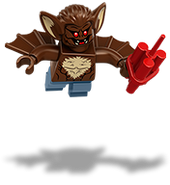 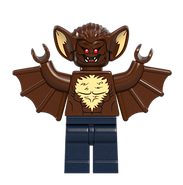 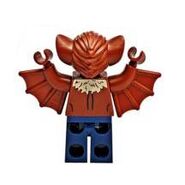 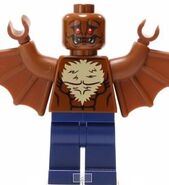 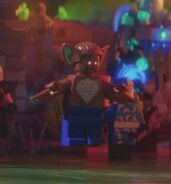