This article is about the Monster Fighters minifigure. For the Batman character, see Man-Bat.

The Manbat has unprinted Dark Brown legs. His torso is dark brown with Reddish Brown printing of a bare hairy chest on it. His arms are dark brown with reddish brown hands. The arms are not connected in the traditional method for minifigure arms, which allows them to move vertically up and down, instead the arms jut out from his body horizontally, and can therefore be turned in a circle. They have small wings jutting out from their lower side. The Bat Monster's face is reddish brown, and printed with red eyes and a mouth full of pointed white teeth. His dark brown hairpiece covers the back of his head completely, and has very large ears protruding out of it on either side.

Manbats are hideous, winged servants of Lord Vampyre, who perch on the Vampyre Castle, guarding it from trespassers. 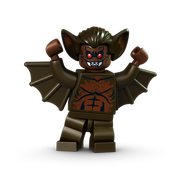 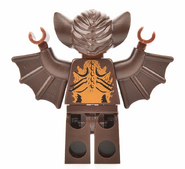 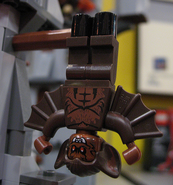 Manbat at the Toy Fair 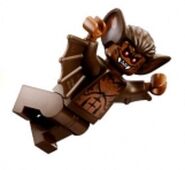 On LEGO.com
Add a photo to this gallery