"Hear the music of the maracas!"
―Maraca Man

The Maraca Man, also known as Mariachi,[1] is a minifigure from 8684 Minifigures Series 2. He has a pair of maracas, a poncho, and a sombrero, as well as a black display stand.

The Maraca Man has brown legs and hips, a light stone grey torso, dark tan arms and yellow hands. He has two decorated cloth pieces that create a poncho with green and red patterns on it. He has a yellow head with black eyes, white pupils, eyebrows, a large mustache that curves down at the end, and a large open mouth displaying his teeth. A large green sombrero with gold markings around the rim is included as well as two red maracas decorated with green near the top. 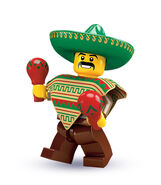 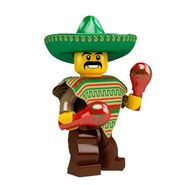 The Maraca Man on his base 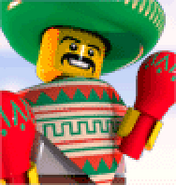 The Maraca Man in LEGO Ninjago: Rise of the Snakes

Poncho +
Appearances
8684 Minifigures Series 2 +
ArticleRating
2 +
Image
Mari!.jpg +
InfoboxTemplate
Minifigure +
ShopDescription
“Hear the music of the maracas!”<br … “Hear the music of the maracas!”<br />Can you hear that? It may be hard to hear at first, but keep listening and soon you’ll hear the sound of a pair of bright red maracas rattling out a fun and festive tune. That’s how everybody knows that the Maraca Man is on his way!When the Maraca Man dances through the street shaking his maracas, everyone around him finds themselves cheering up. Where he comes from is a mystery and where he’ll go next is too, but whenever he’s near, people smile, clap, and tap their feet to the beat!ile, clap, and tap their feet to the beat! +
Theme
Minifigures
Series 2 +
Title
Maraca Man +
Years
2010 +
Advertisement