Marcus Flint was a Slytherin student at Hogwarts. He was also Slytherin's Quidditch Captain and a Chaser. Instead of Flint being a chaser in 4737 Quidditch Match, he holds a beater's bat.

In LEGO Harry Potter: Years 1-4, Marcus has the same hair-piece and face as the physical minifigure. However, instead of the 2010 Slytherin Quidditch torso, he dons the original as well as white legs with knee-pads. Marcus is armed with a brown wand, like most characters. 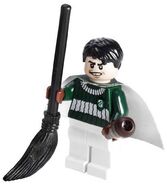 Flint with his broom 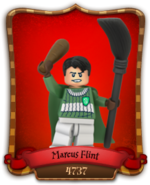 Flint on his Broomstick. 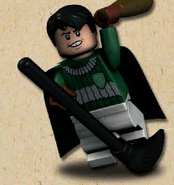