In LEGO Island she was written to be a gossip[1] and she can be found asking the player to click on the Superstore to change its appearance as it is closed for remodeling. She also owns Mr. Pollywanna and one of the residential district houses.

At the start of LEGO Island Pepper delivers her a pizza for bricks that she says she'll have Ed Mail send over to him. Afterwards she be seen wandering LEGO Island and when the grocery shop is deconstructed and rebuilt. In the Game Boy Advance version, she asks you to help pickup the food that has been scattered around LEGO Island. She does not appear in the Game Boy Color version.

During Island Xtreme Stunts she can be found at her Grocery Store and Post Office talking about the gossip around LEGO Island. She also asks Pepper at help move crates around in the store. 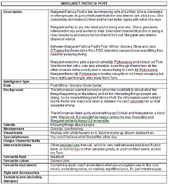