Maria Hill is a Marvel Super Heroes minifigure that first appeared in LEGO Marvel Super Heroes. She tells the player a little about the area or building they are entering for their level. Maria made her physical debut in the SHIELD Helicarrier set.

Maria Hill is the former Deputy Director of S.H.I.E.L.D., and also held the title of "Commander". She enjoyed a well-deserved reputation as tough-minded and by the book. Her clearheaded pragmatism was a valued source of reason during the critical discourse surrounding the Avengers Initiative. After Nick Fury faked his death, she worked with him and was a part of the assault team that took down the Helicarriers from Project Insight.

Hill joined Stark Industries in the immediate aftermath of the fall of S.H.I.E.L.D. to help protect herself from prosecution. However, Hill stayed in touch with Phil Coulson and S.H.I.E.L.D., acting as an intermediary between the organization and the Avengers during the War on HYDRA. Hill temporarily rejoined Nick Fury as his second-in-command on the Helicarrier No. 64 during the Battle of Sokovia to help defeat the genocidal artificial intelligence Ultron. Hill later moved to the New Avengers Facility to assist the Avengers.

Following the Avengers Civil War, Hill was fired from Stark Industries by Tony Stark. In 2018, Hill and Fury, along with fifty percent of the universe, was killed when Thanos completed the Infinity Gauntlet. Five years later, Hill was resurrected by Bruce Banner using the Infinity Stones and was among those present at Tony Stark's funeral. 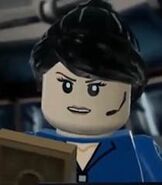 Maria Hill's backside of her face