Captain Maria Rambeau is a former United States Air Force pilot and a single mother of Monica Rambeau. She became best friends with Carol Danvers, who was presumed dead for six years, after a plane accident. Maria was reunited with Danvers during the Kree-Skrull War and helped her remember her early life. She aided her, Nick Fury, and Talos in finding Mar-Vell's Laboratory and a group of Skrull refugees. Maria fought against the Kree there and managed to outmaneuver and kill Minn-Erva during a chase in Mojave Desert. She returned to her home, where she celebrated the victory with her new allies. 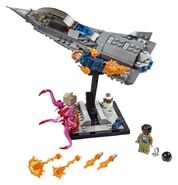