Mario is a Super Mario figure released in 2020.

Mario is a larger than a usual Minifigure and features electronic functionality: his eyes, mouth, and chest all light up in different manners according to his reaction. The figurine includes a scanner that allows the figure to react to specialized tiles included in the Super Mario sets and react to bricks depending on their colours. Mario will treat red bricks as lava and react in a painful manner and treat purple ones (Soda Jungle) as poisonous and react in a sickened manner, for example. Mario can also react to motions alone: shaking him, for instance, will provoke a dizzy reaction. He will also yelp ‘Mamma-mia!’ if somebody pulls off his overalls.[1]

When Mario interacts with certain action tiles, he generates virtual coins, the total of which becomes visible on his chest after he finishes a level. When he interacts with a Warp pipe’s action tile, he triggers a time limit and Mario has to generate as many coins as possible before finishing the level. The maximum number of coins that Mario can generate before finishing is 999,[2] but this is almost impossible to achieve without playing on a deliberately unbalanced course.

Mario is an Italian plumber who protects the Mushroom Kingdom from the threats of Bowser. His full name is Mario Mario[3] and he has a younger, thinner, taller brother named Luigi. 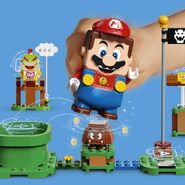