"I'll be giving a briefing on Rex Fury in ten minutes! Even though he's probably a million miles away from here by now! Do NOT DISTURB ME!"
―Dunby before napping and eating doughnuts in his office. [src]

Marion Dunby is one of the characters in the video game LEGO City Undercover. He is chief of the LEGO City Police.

Dunby is a police officer with some black legs and torso. He has a white hat, similar to a Sailor's. 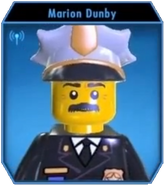