Martian Manhunter has a green head without a head accessory and is printed with red eyes and a black area surrounding them to give his head depth with several extra black lines to give his head shape. He wears a blue cape, and has diagonal, red straps going up his otherwise bare, green chest which meet at the cape and connects to it with a red circle that is black on the inside and is decorated with a red asterisk, attached to his blue collar. His hips are red and printed with a black design showing the start of his tunic. His light blue legs are printed with the red and black flaps of the tunic. This figure is based off his New 52 Appearance.

Martian Manhunter has a green head without a head accessory. He has large, red eyes with black pupils and a black area surrounding them to give his head depth. There is a dark green design on his head to give it shape. He wears a blue cape, and has diagonal, red straps going up his otherwise bare, green chest which meet at the cape and connect to it with a red circle that is black on the inside and is decorated with a red asterisk. Martian Manhunter's legs are blue and his hips are red.

He can fly, shoot lasers from his eyes, has super strength, and is invincible.

The Martian Manhunter was once a martian called J'onn J'onzz on Mars. After all the natives died and the planet had been invaded, J'onn J'onzz was teleported by a scientist from our planet. From there on, he was stranded on Earth. He then discovered the power that he had should have used to be a hero. So J'onzz now works as a superhero known as The Martian Manhunter (on Mars, a Manhunter is a term for a policeman) and uses his shape-shifting and telepathy powers to solve crimes. He is a member of the Justice League which also includes Superman, Batman, Wonder Woman, Green Lantern, Flash, Aquaman, Cyborg, and occasionally, Batgirl, Nightwing, Supergirl, Hawkman, Hawkgirl, Shazam, Zatanna, and Huntress.

In the console versions, Martian Manhunter is a member of the Justice League and runs the Watchtower. At one point, he contacts Bruce Wayne to check on him, and then informs him of an emergency. He is also watching Hawkgirl, Cyborg, Zatanna, The Flash, Aquaman, Wonder Woman, and Superman.

He later views a Kryptonite trail shaped like The Joker's face from the Watchtower and calls the Justice League to Gotham City. Wonder Woman, Cyborg, The Flash, and Green Lantern respond.

Shortly after, Manhunter is contacted by Batman and he aims the Watchtower's weapons at Lex Luthor's power armour to defeat it.

Manhunter plays no role in the portable version's story but can be bought for 200,000 studs.

Martian Manhunter first appears when he builds a slideways teleporter in the watchtower, which Green Lantern comes through and villains invade the tower. He is unlocked for no cost. He is playable along with Flash and Cyborg in the second half of LEGO Batman 3. 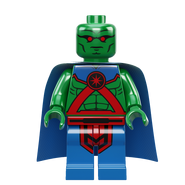 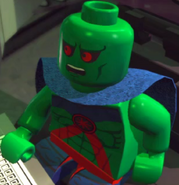 Manhunter checks in on Bruce Wayne and Tim Drake 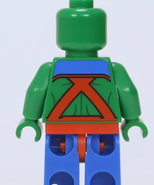 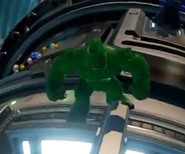 Manhunter as a big fig 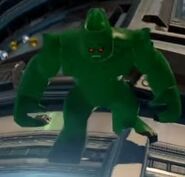 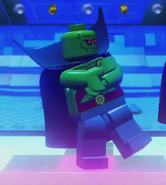