Marty is a minifigure who appears in LEGO Pirates of the Caribbean: The Video Game.

Marty was a dwarf pirate who lived in Tortuga.

In The Curse of the Black Pearl, he is hired by Joshamee Gibbs, Will Turner and Jack Sparrow as apart of the crew to reclaim the Black Pearl. During the attack between the Black Pearl and the HMS Interceptor, he uses Gibbs' rum flask as a cannon projectile. After Elizabeth Swann frees the crew from the Pearl's brig, he and the crew escape Isla de Muerta with the Pearl. They later rescue Jack from Port Royal.

In At World's End, he joins Captain Barbossa in the plan to rescue Jack from Davy Jones' Locker. He fights in Calypso's Maelstrom agains the East India Trading Company and Davy Jones. He remains a crew member of the Pearl after Barbossa mutinies against Jack again.

In On Stranger Tides, the Black Pearl is attacked by the Queen Anne's Revenge. Marty was taken prisoner by Blackbeard.

Marty has a bald head, a goatee and a red shirt that shows to have a white shirt underneath.

Marty wields a large gun like in the films, similar to Bazooka Trooper from LEGO Indiana Jones: The Original Adventures. In the game he has the ability to crawl into small spaces and destroy shiny silver elements with his gun. 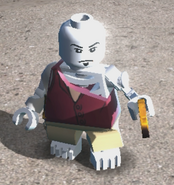 Retrieved from "https://brickipedia.fandom.com/wiki/Marty?oldid=1851009"
Community content is available under CC-BY-SA unless otherwise noted.