Brickipedia
Register
Don't have an account?
Sign In
Advertisement
in: Class 3 articles, Spider-Man minifigures, Minifigures introduced in 2002,
and 4 more
English

Mary Jane Watson is a Spider-Man Minifigure released in 2002. In 2014, she was redesigned for the Marvel subtheme of the Super Heroes theme.

Mary Jane wears a red Chinese shortsleeve dress to the World Unity Fair that was held at Times Square. The minifigure featured some changes from the movie where she wears a ponytail instead of a bun plus the yellow arms that do not contain the dark red shortsleeves, and is also seen with legs instead of a skirt. The torso is printed with an ornate gold design in the left hand corner and a collar.

This variant from the beginning of the movie has Hermione Granger's original hair in bright orange and the same face. But Mary Jane did not sport the short hair until after she graduated from Midtown High. She has a green torso and yellow hands, and also wears navy blue legs. The torso is printed with a green cardigan and a purple tank. The majority of the torso pays homage to the Green Goblin's patterns that consists of purple and green.

The minifgure depicts Mary Jane in a white cardigan plus white pants and a pink tank. But in the movie, she wears a red tank top, and a pink cardigan with matching pants.

She has a darker version of her previous hairpiece. Due to the changing from yellow to flesh for licensed themes in 2004, the head is a light nougat head with a simple smile. Unlike the movie where Mary Jane was shown in a brown dress, her torso uses the same printing from the dress but as a light blue longsleeve with dark blue pants.

She has a long dark red ponytail and her face is printed with a dual expression: happy and scared. She wears a black tank top printed with feminine curves and a heart with Spider-Man's mask design. The back features the back of the tank top. She has unprinted blue legs.

In the videogame, Mary Jane looks identical to her 2014 appearance, which is based on the "Ultimate Spider-Man" TV series.

Mary Jane Watson was in high school with Peter Parker and Harry Osborn, but later graduated. Afterwards she became Harry's girlfriend and tried to get into Broadway, which she was later successful in doing. She was later attacked by a group of thugs and saved by Spider-Man, and shared an upside down kiss. She dumped Harry, was briefly engaged to John Jameson and later went out with Peter, finding out he was Spider-Man.

Mary Jane was the childhood best friend of Peter. Early in their high school years, they tried dating but found it awkward and decided to just stay friends. She is determined to become a journalist, particularly at the Daily Bugle Communications, to rehabilitate Spider-Man's reputation, which was blasted by J. Jonah Jameson on a daily basis. Her first attempt to get a job there was stopped by a battle with Beetle, Spider-Man and his team (Nova, Iron Fist, Power Man, and White Tiger). 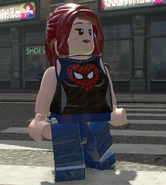