Matoro is a BIONICLE character. He first appeared in the BIONICLE storyline as a Matoran on the island of Mata Nui. He was later rebuilt into a stronger form, and later became a Toa Inika. Him and his team went into the depths of Mahri Nui to use the Mask of Life to save the dying great spirit Mata Nui, and so were transformed into Toa Mahri. At the end of this mission, he realised that he had to make the ultimate sacrifice to save Mata Nui and his friends by donning the mask himself, which transformed his body into pure life energy, reviving Mata Nui, but tragically killing Matoro. 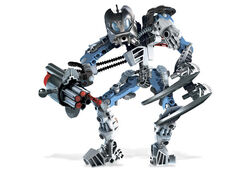 Matoro has been released multiple times, and so may refer to: 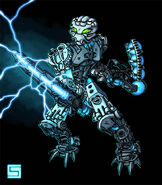 Add a photo to this gallery
Retrieved from "https://brickipedia.fandom.com/wiki/Matoro?oldid=1150767"
Community content is available under CC-BY-SA unless otherwise noted.