Max Rebo is a Star Wars minifigure released in 2013.

Max Rebo consists of blue short legs, entirely blue torso and a headpiece moulded in a lighter blue than the torso and legs. The headpiece is a new mould and has white and black printing for eyes, the only printing on the figure. The headpiece has large droopy ears, a long bulbous proboscis, bugged out eyes and small scattered bumps.

Max Rebo was the leader of the Max Rebo Band. He and his band provided music and entertainment for Jabba and those that served him. He signed up to work with Jabba for no pay, receiving an all-you-can-eat meal plan instead, an act that greatly annoyed his fellow band members. After Jabba's death, the band split up.

Years later, Rebo appears in the Sanctuary bar on Tatooine, performing with a new band. This bar was frequented by Boba Fett during his time as Daimyo of Mos Espa. He would also attend a Life Day celebration held by Rey in the LEGO Star Wars Holiday Special. 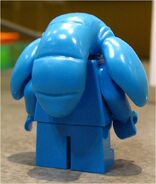 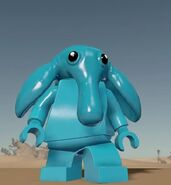 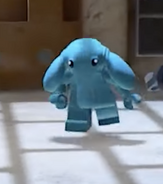