McDbio3 Reidak is a McDonald's promotional set released in 2006. The set is based on 8900 Reidak.

The promotional set is a loose recreation of the retail set, featuring a non-functional and undetachable version of the Piraka's zamor sphere launcher and most notably a version of Reidak's signature buzzsaw weapon that will actually spin if a button is pressed, unlike the version in set 8900, which is one unmoving part. As with all McDonalds promotional sets from 2006, this set has more limited articulation than the set it was based on. 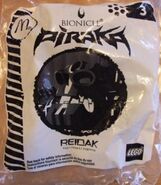