"The Mountain should belong to us. Soon Exo-Force will run out of pilots and the mountain will be ours."
― Meca One

Meca One is the golden leader of the robots, and was the first robot to rebel against the humans. His arms, legs, and body are golden, with black on his torso as well as gold. He was created by Sensei Keiken.

Meca One replicated himself many times so if one was destroyed another could take his place, making it worthless to try to destroy him. Meca One believed the Striking Venom would be able to shatter Exo-Force. When the attack on Sentai Fotress failed, he ordered the robots who had built Striking Venom to be dismantled. He then monitored the progress of the human squad sent to find the Golden City and so knew when they had made the discovery. Determined to seize the city and its secrets, he dispatched robot battle machines to both attack the city and to go after the computer codes. 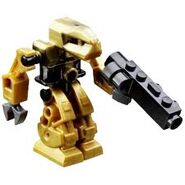 Meca One with a blaster
(Note: facing the wrong way)