Mera, is a Super Heroes minifigure who first appeared in LEGO Batman 3: Beyond Gotham. She made her physical debut in 76095 Black Manta Strike, a set based on the 2018 film, Aquaman.

Mera is the queen of an underwater dimension who traveled to ours to ask Aquaman for help against usurpers. She and Aquaman eventually fell in love and got married. 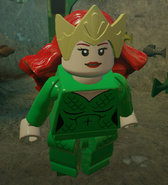 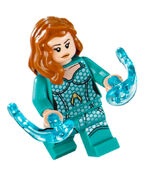 Mera in a promotional poster for the Aquaman DLC