"Welcome, my lords, to Isengard."
―Merry in The Lord of the Rings: The Return of the King

Merry, is a Lord of the Rings minifigure released in May 2012. He is exclusive to 9472 Attack on Weathertop.

Meriadock Brandybuck was part of the Fellowship of the Ring, along with Gandalf, Boromir, Aragorn, Frodo Baggins, Gimli, Legolas, Samwise Gamgee, and Peregrin Took. He was with the Fellowship in Moria, Lothlorien, and at Amon Hen. He saw Boromir fall, after which he and his fellow Hobbit Pippin were taken by the Uruk-hai. However, they escaped after the Uruk-hai were attacked by the Rohirrim on the Riddermark, at which point they fled into Fangorn Forest. In the forest they found Treebeard, and ent, who saved them from Grishnákh. They convinced the Ents to attack Isengard, and with that stop Saruman from destroying their wood. After this attack, he and Pippin reunited with Gandalf, Gimli, Legolas and Aragorn, and went back to Edoras. He was with the Rohirrim in the battle of Pelennor Fields, and survived the Battle of the Morannon. 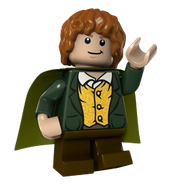 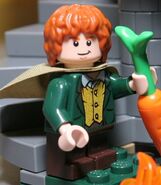 Merry at the Toy Fair 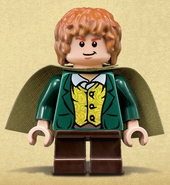 Back printing and alternate expression 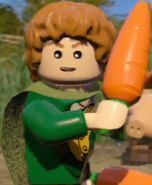 Merry in LEGO The Lord of the Rings: The Video Game 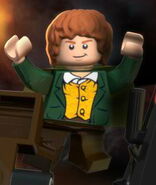 From the Battle at the Black Gate minigame 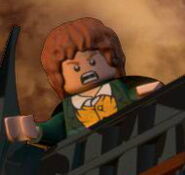 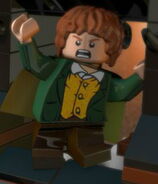 With Pippin at the Black Gate 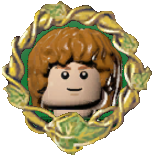 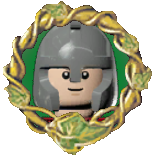 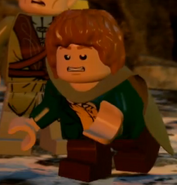