Merryweather is a Disney Princess DUPLO Figure released in 2014, although she appeared for the first time in a form of a brick decorated with her printing in 2012.

Merryweather's impression printed on a light pink brick decorated with stars resembles the image shown in the Disney's animated feature - a plump middle-aged woman dressed in blue wearing a a pointy hat wrapped in a shawl. She also has a wand and fairy's wings.


Merryweather's DUPLO figure has light nougat skin, dark eyes and dark hair visible from under the blue pointy hat wrapped in a light blue shawl, which ends hang loose on both sides of character's head. Her torso is mostly blue, with lighter blue lower section representing a bodice. The front of the dress is decorated with little silver stars. It has long blue sleeves leaving just the hands bare. On her white unprinted legs Merryweather wears a light blue removable textile dress.

Merryweather first appeared in the 1959 Disney movie Sleeping Beauty and was Aurora's fairy godmother. She lived in a cottage in the woods. Merryweather wished the young princess all the best but was unable to prevent or break the spell of an evil fairy called Maleficent, who predicted the girl's death on her 16th birthday. Merryweather softened the curse by changing her death to a deep slumber that will only be awakened by true love's kiss. 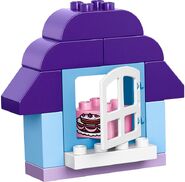