Miles Morales is a variant of Spider Man from the Ultimate Spider-Man comics series from 2011. His costume is similar to Peter Parker's in design, but varies drastically in color. This minifigure was released in 2015.

Miles is also the main protagonist of the 2018 movie, Spider-Man: Into the Spider-Verse.

Miles Morales hails from the alternate universe of Earth 1610 where Peter Parker died after a run-in with the Green Goblin. Miles was the son of a police officer named Jefferson Davis and a medical-doctor named Rio Morales with Miles's uncle Aaron secretly being his universe's version of the Prowler, a classic super villain enemy of Spiderman.

Following Peter's death, Miles was bitten by a spider that had been genetically enhanced with the Oz (Goblin) Formula and which escaped Oscorp when Prowler robbed it. The spider bit Miles and embedded him with the powers of Spider-Man and two additional abilities: the power to effectively turn invisible with Spider-Camouflage and the power to generate electricity from his body.

After discovering he had spider-like super powers, Miles was initially hesitant to use them, preferring instead to live a normal life. However, he was inspired by the late-Spider Man philosophy of "With great power comes great responsibility" and decided to take on the mantle of Spider-Man while studying the moves of the old Peter Parker to better his crime-fighting. He has occasionally visited Earth-616, where he first met that world's version of his predecessor, and formed a romantic relationship with fellow multiverse-traveler Ghost Spider (Gwen Stacy).

Spider-Man: Into the Spiderverse

In the film Spider-Man: Into the Spiderverse, Miles was bitten by a Spider from an alternate universe which crossed over through a Super Particle-Collider created by his universe's Kingpin and Doctor Octopus (Dr. Olivia Octavius) who aimed to use it to bring over alternate-universe versions of Kingpin's late-wife Vanessa and son Richard. Peter Parker attempted to stop the villains but was taken down by the Green Goblin and killed by Kingpin in-front of Miles's eyes, shorly after Peter met and promised to help train Miles.

After this, Miles found himself in the company of other spider-people brought through Kingpin's collider and was trained predominately by the mainstream adult Peter Parker along with Spider-Gwen, Spider-Man Noir, Peni Parker and Spider-Ham. Miles joined the Spider-People in an effort to get them back to their dimensions and stop Kingpin from possibly destroying reality with his collider. In the process, Miles learned his beloved Uncle Aaron was the Prowler, who was subsequently killed by the Kingpin. This pushed Miles to finally become his own Spider-Man and also receive his own suit from his earth's May Parker, the late-Peter Parker's genius aunt. Miles then worked with the Spider-People to foil Kingpin's plans, afterwards helping them return to their own realities. 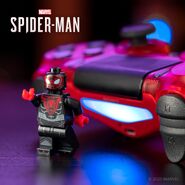