Brickipedia
Register
Don't have an account?
Sign In
Advertisement
in: Class 4 articles, The Simpsons minifigures, The LEGO Movie Minifigures,
and 5 more
English

Milhouse Mussolini Van Houten is a minifigure who was released in 2014 as a part of The Simpsons theme.

Milhouse has blue hair, and matching eyebrows. He wears a pair of red glasses, a lavender and red and yellow short legs which are identical to lisa's legs.

Milhouse Van Houten is Bart Simpson's best friend and is often picked on by bullies, such as Nelson Muntz. He has a huge long list of medical problems - almost as long as Mr. Burns - and has a crush on Lisa.

In The LEGO Movie, he is among the Master Builders that meet in Cloud Cuckoo Land. 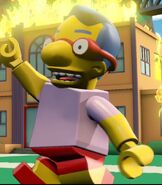 Milhouse appearing in The LEGO Movie 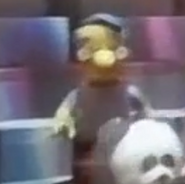