Brickipedia
Register
Don't have an account?
Sign In
Advertisement
in: Class 3 articles, Pages that link to Legopedia (Russian), Minifigures (theme),
and 5 more
English

Mime is a minifigure introduced in 2010, as part of the 8684 Minifigures Series 2. He has printed arms. He includes three interchangeable heads and a black display stand. He also has 3 faces; a happy face, a scared face and a sad face.

His torso is a black and white striped shirt with a bit of his white skin showing on top. Over his shirt he wears a black jacket with white outline, there is also white buttons. His arms are white with black stripes on them and at the end of them he has white hands. He has plain black legs.

In The LEGO Movie, a Mime was seen as a member of MetalBeard's crew. His ship was blown up by lasers during the raid on the Octan Tower. As Speed Racer was seen as a prisoner in the Think Tank with the Master Builders, it can be assumed that he survived as well. 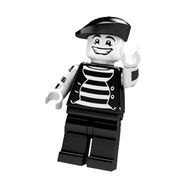 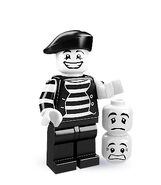 The Mime on his base with smile. 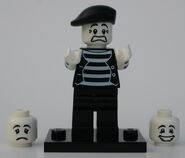 The Mime on his base with scared expression. 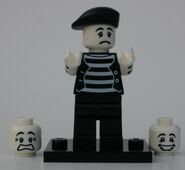 The Mime on his base with frown.

The Mime as part of MetalBeard's crew.

The Mime with Harley Quinn in The LEGO Movie 2: The Second Part.

Deutsch Français Русский
Community content is available under CC-BY-SA unless otherwise noted.
... more about "Mime"
RDF feed
Accessories
3 Interchangable Heads, Beret +
Appearances
8684 Minifigures Series 2 +
ArticleRating
3 +
Image
MIME!!.jpg +
InfoboxTemplate
Minifigure +
ShopDescription
“ ”
If you’ve ever been sure … “ ”<br />If you’ve ever been sure that somebody was silently following you and making silly faces, but nobody was there when you turned around, it was probably the Mime. He shows up in public parks, outside restaurants and in market squares, where he performs routines and does impressions of passers-by without ever making a sound.No one pretends to be trapped in an invisible box or walking against the wind as well as the Mime does. His best pal is the Circus Clown, and the two frequently join forces to get even bigger laughs and applause from their audience!r laughs and applause from their audience! +
Theme
Minifigures
Series 2 +
Title
Mime +
Years
2010- 2014, 2019 +
Advertisement