Brickipedia
Register
Don't have an account?
Sign In
Advertisement
in: Class 3 articles, Pages that link to Legopedia (Russian), Minifigures introduced in 2014,
and 2 more
English

The Min-Droid, which was given his nickname by General Cryptor, is a short Nindroid Warrior. He is quick to anger and very energetic, but also sensitive about his appearance. He is short because he was the last Nindroid in his batch off the factory line. By the time he was built, the machines had nearly run out of metal. Rather than wasting the material, they produced a smaller Nindroid.

He first appeared in Art of the Silent Fist. He guarded the power station with General Cryptor and other Nindroids. He attacked ninjas who were trying to shut off the power. He tried to kick Kai with his leg, but when he got out of his way, Min-droid kicked the power generator, broke it's glass and entered in generator. He destroyed it, and it exploded, causing electromagnetic wave to spread over Ninjago and shut of the power in the whole land.

He was brought back in Codename: Arcturus. He fought Kai while he was on a gas tank, and his small size allowed him to avert being hit by a tunnel, while two other Nindroids weren't so lucky. He was seemingly destroyed in a huge explosion which happened after that.

Min-Droid survived, though, as he re-appears in The Void as part of the Nindroid crew seeking for the Golden Weapons. When the Ninjas are found, General Cryptor sends some Nindroids to deal with them, including Min-Droid. While most of these Nindroids are thrown to space upon defeat, Min-Droid manages to grab a cable to not get dragged into space, but gets another ambiguous destruction scene when an engine ignites in front of him.

Somehow, Min-Droid survived for a final appearance in The Titanium Ninja. When Nya faces General Cryptor, she tricks him into belittling Min-Droid again. This turns out to be the last straw for Min-Droid, who attacks Cryptor just as Nya planned. Both Cryptor and Min-Droid are finally destroyed in mid-fight when Zane freezes New Ninjago City in his fight against the Overlord and both Nindroids shatter. 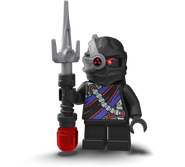