Minions: The Rise of Gru

Minions The Rise Of Gru

Minions: The Rise of Gru is a licensed LEGO theme first released on April 27, 2020 based on the film of the same name. Initially, this theme was planned to be released alongside the film's release in 2020, however, the COVID-19 pandemic caused the film to be delayed to 2022. Despite the film's delay being announced, 75549 Unstoppable Bike Chase and 75551 Brick-Built Minions and Their Lair were released in 2020. the remaining three sets were released on April 26, 2021. 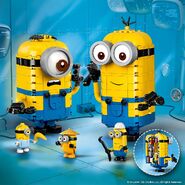