The Minotaur, also called The Guardian of the Golden Bull, was a character in one of the two online games Johnny Thunder and the Adventurers. The Minotaur first appeared in the online game as an enemy in the labyrinth and then played against Johnny Thunder in a modified game of Connect Four for the possession of a legendary artifact, the Golden Bull.

According to the game's cutscenes, the Minotaur's origins are the same as in Greek Mythology-Minos, king of the island of Crete cheated the god of the sea, Poseidon, in a bargain. To gain his revenge, Poseidon put a curse on Minos' wife which caused her to fall in love with a beautiful bull Minos was supposed to sacrifice to Poseidon. When Minos' wife gave birth to a beast-half man and half-bull. Minos' had a labyrinth built to hide the beast, which had been dubbed the Minotaur (Greek for bull of Minos).

However, the game adds a twist onto the myth. According to Dr. Kilroy, a sacred artifact, known as the golden bull was hidden in the maze, guarded by the Minotaur. The adventurers discovered that the golden bull was not actually in the maze, but a clue was. The adventurers traveled to a nearby island seen in a mural in the labyrinth. Johnny Thunder scaled the cliff to discover a temple. Hidden behind the veil was the shadow of a bull like creature (presumably the Minotaur) who claimed to be "The guardian on the Golden Bull". The guardian challenged Johnny to a modified game of Connect Four. Johnny won, and was awarded with the golden bull. 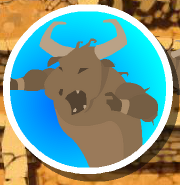 Minotaur when catches the player.