The Mirkwood Elf Chief, also known as Galion, is a minifigure from The Hobbit: An Unexpected Journey released in 2012.

The Mirkwood Elf Chief face printing shows a standard elf face with a slightly pleasant expression shown for emotion. The torsos printing features a red robe which extends down to the legs. The legs printing details some of the red robe loosely hanging from the torso and two golden keys. 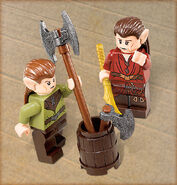 The guard and the chief
Add a photo to this gallery