Brickipedia
Register
Don't have an account?
Sign In
Advertisement
in: Class 4 articles, The Hobbit: An Unexpected Journey minifigures, Animals, Minifigures introduced in 2012
English

Mirkwood Spiders are giant, brick-built spiders that appear in The Hobbit: An Unexpected Journey released in November 2012.

Mirkwood Spiders were massive in size and lived in the forest of Mirkwood. They (as opposed to ordinary spiders) were descended from the spider-creatures of the Ered Gorgoroth, as well as the evil spider-like creature being known as Ungoliant. 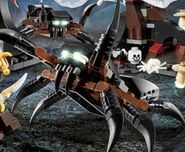 On the box art for 79001 Escape from Mirkwood Spiders

The front of the spider