Brickipedia
Register
Don't have an account?
Sign In
Advertisement
in: Class 3 articles, Articles in need of expansion, Ninjago Minifigures,
and 4 more
English

Misako Montgomery Garmadon is a Ninjago character who was introduced in the Ninjago: Masters of Spinjitzu episode, "The Stone Army". She is the mother of Lloyd Garmadon and the wife of Garmadon, as well as a long time friend of Wu. A younger version appears in The LEGO Ninjago Movie, where she goes by the nickname Koko as well as the alter ego of Lady Iron Dragon.

Misako has a hairpiece that is the same mould that was first used for Princess Tamina's minifigure. Like the other Ninjago characters, her face is yellow. She has black eyebrows, pink lips, eyelashes, wrinkles at the sides of her eyes and glasses with grey rims and round frames. Her hair is medium grey with a light grey streak in it and runs in a braid down her back. She wears a buttoned cream jacket with long sleeves, buttoned pockets in the front, and a brown belt with a gold buckle around the waist. A green ascot is located around her neck. She wears sand-green pants, which have zippered pockets at the front.

Several variants of Misako were introduced for The LEGO Ninjago Movie, which reinterprets the character as being younger. The version from 70620 Ninjago City uses the same torso as Claire from the 70751 Temple of Airjitzu set, which has also appeared in several Creator and City sets.

Years ago, Misako married and had a son with Lord Garmadon.

When the Ninja visit the Ninjago Museum of History, the workers inform them that the Great Devourer's venom had worked its way through the sewer system of Ninjago City and ended up seeping through into the Museum, resulting in the venom infecting the Museum's merchandise of the Stone Warriors and bringing them to life. While the Ninja are fighting off the toy Stone Warriors, one slips out of the room and down the hallway, and as Master Wu follows it he runs into Misako. Lloyd then walks out from the merchandise room to see his mother, and as Misako tries to explain to him that she had her reasons for being away, he refuses to listen to her.

Lloyd heads to another room to be alone, but Misako follows, informing him that she left to do research for the Green Ninja prophecy in hopes of preventing it. The other Ninja arrive, and she begins telling a story of the First Spinjitzu Master that involves the Island of Darkness and the Stone Warriors.

However, in another part of the Museum, the Great Devourer's venom drips from the ceiling onto a Giant Stone Warrior statue, bringing it to life. While Misako is telling them that there is hope to prevent Lord Garmadon and Lloyd's fight, the Stone Warrior rampages through the building and confronts the Ninja. They attempt to fight it off to no avail, to which they flee and run through the Museum as they try to figure out how to defeat it.

While Master Wu is thoughtfully gazing at a picture of Lord Garmadon, Misako, and himself before Lord Garmadon's banishment, Misako walks in the room commenting on how Lord Garmadon looked before. She hands Master Wu a scroll containing her research, and as he looks over it she says that she should have chosen him instead. When he says that is in the past, she replies that there is still the future while holding his hand. However, their moment is interrupted by an earthquake.

At Ninjago City, after the Ninja save a woman from the crumbling earth, Misako realizes that the earthquakes are a sign of the Stone Warrior Army's return. As the citizens of Ninjago rush into a building to get to the roof in order to escape on the Destiny's Bounty, Dareth bumps into Misako in the rush, making her drop her research scrolls. When they arrive on the roof, Misako attempts to hold Master Wu's hand again, only to be separated by the enormous crowd heading toward the Bounty.

Right as the Destiny's Bounty is leaving, Misako remembers her scrolls, saying that they would be too important to lose and heading back down. She spots the scrolls tangled among the wires of the long ceiling lights, though she is met by Stone Warriors and carefully climbs down the wires. Upon obtaining the scrolls she slips while jumping to the railing, and before she falls Master Wu grabs her and helps her up. The two run into a room where they are cornered, trying their best to fight off the warriors by using Spinjitzu. Seeing that their efforts were pointless, they decide to escape through the window, only to be caught by Nya on the Destiny's Bounty. Master Wu loses the photo in the wind, Misako assuring him that the past is the past.

The ninja prepare the Destiny's Bounty to sail to the Dark Island and find out if Garmadon is there. Misako joins them. On the way, they are attacked by Star Teeth and find Dr. Julien. The Bounty is destroyed, but the doctor repairs it and turns it into a half blimp, half boat. They proceed to the Dark Island. Once there, Misako says that finding the Temple of Light will give the ninja pure elemental powers to defeat the Stone Army. The ninja find the temple, and charge themselves up for the final battle. Misako watches from afar, and says that good may win after all.

Soon after, Misako realizes that returning the Helmet of Shadows to its pedestal in the celestial clock might stop the countdown to the final battle, meaning that Lloyd would not have to fight Garmadon. She then formulates a plan with the four ninja where she would attempt to steal the helmet from Garmadon and return it to the clock. She feigns capture at the hands of the four ninja, who are disguised as Stone Warriors, and is brought before Garmadon. Misako at first tries to convince Garmadon that he can be good and prevent fighting with his son, but Garmadon insists that the final battle is their destiny. He then sets his helmet aside and turns his back towards Misako, talking about how he still loves her and inviting her to join his side, but while he is doing this, Misako silently steals the helmet. She then escapes with the ninja and Nya, who comes to rescue them, in the Power Drill. However, the stone army and Garmadon, who pilots a giant four-armed robot, give pursuit, and Garmadon ends up catching them, but Lloyd destroys his robot before he can do any harm. They are about to face off, and Lloyd has the upper hand, but Lloyd cannot bring himself to harm his father, and the group continues with their journey to the clock.

At the clock, Misako tells the group that they need to find the helmet's pedestal among the clock's complex moving mechanisms, but the clock's complexity coupled with the interference of the stone army delay their attempts. Misako finally is able to find the pedestal and place the helmet on it, and the clock stops. At first, the group believes that they accomplished their mission, but the clock starts again and it is revealed that they were moments too late; the clock's hands point at the symbol representing the final battle, indicating it has started, and the mechanisms line up to reflect a beam of light somewhere across the island. The cliff collapses, separating Nya from the rest of the group and sending the others into the ocean below, though they survive. After exiting the ocean, Jay and Kai want to rescue Nya from the Stone Army, but Misako and Wu tell them that, although that time will come, they must divert all their efforts to preparing Lloyd for the final battle, which could begin at any time.

Misako continued to aid the ninja during their subsequent engagements with the Stone Army and Garmadon, who was eventually possessed by the Overlord. With the Bounty once again downed, the group were forced to utilize the Ultra Dragon to make their way back to Ninjago while Lloyd piloted the Golden Mech of The First Spinjitzu Master. During the ensuing battle for Ninjago, Misako noted that the Helmet of Shadows could be used to control the Stone Army, and was proven right when it fell into the hands of Dareth. Lloyd's defeat of the Overlord not only freed Ninjago but also purified Garmadon of all evil, and Misako was reunited with her husband at long last.

Misako took up residence with Garmadon at a monastery where he passed on his nonviolent "Way of the Silent Fist" to students. She later greeted the Ninja when they arrived at the monastery fleeing New Ninjago City. She noticed Nya watching Jay and Cole, and quickly recognized Nya's conflicted feelings about the two based on her own past experience. After the first attack by the returned Overlord's Nindroids, Misako remained behind at the monastery while Garmadon, Nya, the Ninja, and P.I.X.A.L. departed in their efforts to stop the Overlord.

The Tournament of Elements

In Spellbound it's revealed that Chen had Garmadon put his name a love letter to her sent from Wu. That letter was the reason she fell in love with Garmadon.

She realizes the truth in The Corridor of Elders when Chen reveals it and later on she forgave Garmadon for what he did.

Misako attempts to rescue the Ninja after they are framed by Nadakhan, but is arrested when the Ninjago City Police capture the Destiny's Bounty 2.0. She is taken in for interrogation, only for Nadakhan to appear. Despite her best efforts, Nadakhan is able to trick her into making wishes, and she is later imprisoned in the Teapot of Tyrahn along with Wu and Clouse. After Nadakhan shatters the pot with the Djinn Blade, she is trapped inside it instead. These events would later be undone by Jay's third wish.

Misako takes care of Wu, who has been reduced to toddler age due to his time traveling, while the Ninja address the threat of the Sons of Garmadon.

Misako is part of the resistance force against the Sons of Garmadon, and is later imprisoned alongside Ronin.

In "The Darkness Comes", Misako is present at the Monastery of Spinjitzu when the Firstbourne arrives carrying Faith, and remains there with Wu to care for the new arrivals. In "Endings", she greets the Ninja when they return with Emperor Garmadon, whom she is surprised to see, and comforts Wu after he is informed of Cole's apparent loss. She later leads several civilians into the monastery as the Oni army approaches, and though eager to fight alongside her son honors his wish to look after them. Following the Oni defeat, she is present at the ceremony in which the Ninja commemorate their victory.

Master of the Mountain

In "Shintaro", Misako convinces Wu to go with the Ninja to the Kingdom of Shintaro.

Misako appears in the film "referred as Koko" as a younger, orange-haired woman who is a former warrior and went by the name "Lady Iron Dragon" before she divorced Garmadon. 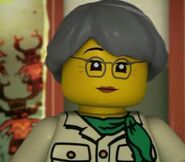 Misako ("Koko") in a poster of The LEGO Ninjago Movie