"I have a theory about... everything."
―Mister Fantastic in LEGO Marvel Super Heroes

Mister Fantastic has slicked back brown hair with a large white streak on either side. He has a blue jumpsuit with black hands. His torso is printed with a black collar and belt, muscles, and the Fantastic Four's insignia.

Mister Fantastic, or Dr. Reed Richards, is the leader of the Fantastic Four (which also includes the Thing, the Invisible Woman, and the Human Torch) and fights enemies such as Galactus and his herald the Silver Surfer, as well as the Four's archenemy Dr. Doom. Along with the other three, Reed was exposed to cosmic radiation during an experimental space flight, resulting in his ability to stretch any part of his body to any length or shape.

Reed Richards has earned his multiple Ph.D.s in Mathematics, Physics, and Engineering. He is also working as a military scientist.

He is Invisible Woman's husband and Human Torch's brother-in-law. He is also the father of Franklin Richards and Valeria Richards, the former being one of the most powerful mutants in the Marvel universe due to his reality-shaping powers.

After the battle at Grand Central Station between The Hulk, Spider-Man, Iron Man, Sandman, and the Abomination, Nick Fury told Agent Coulson to make sure one of the cosmic bricks made it the Fantastic Four for study.

Mister Fantastic teamed up with Captain America to defend Baxter Building from Doc Ock, nearly destroying the lab. The fight spilled onto The Daily Bugle and Times Square, where Spider-Man joined the fight. After Ock was defeated, Green Goblin took the brick to Oscorp.

At the end of the game, he teamed up with the other heroes to fight Galactus. 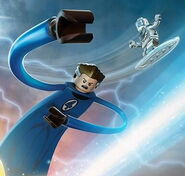 With The Silver Surfer 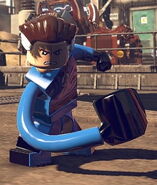 With The Invisible Woman.

Mister Fantastic with Invisible Woman, Thing and Nick Fury in the Fantasticar