Mister Miracle is a Super Heroes minifigure who first appeared in LEGO DC Super-Villains in 2018. His first physical appearance was in 71026 DC Comics Series in 2020.

Scott Free was the son of Highfather, the ruler of the peaceful utopian planet New Genesis. To prevent a war with the post-apocalyptic war-torn planet Apokolips, Highfather had to trade Scott with Orion, the son of Apokolips' ruler Darkseid. Despite his upbringing, he despised the totalitarian rule on the planet. Eventually, he fled to Earth where met and befriended an escape artist named Thaddeus Brown, aka Mister Miracle, and took up the mantle when Thaddeus was murdered. When Scott's love interest Big Barda followed him to Earth, they decided to use their abilities to fight against Darkseid. Both have served as members of the Justice League. 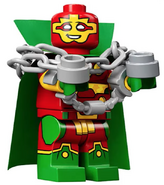 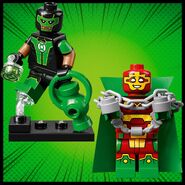 Mr. Miracle with Simon Baz in a promotional image 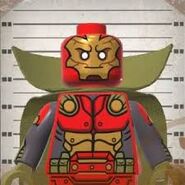