Modulex was a building system that was designed for adults. It was developed by The LEGO Group at the same time as their Modulex sets were produced from 1963 until 1965, and were exclusively available in parts packs by colour. The LEGO Group made Modulex a separate company in 1965, and the text "LEGO" was removed from the studs and replaced with "M".

The idea for the Modulex brick came at an unknown time in the early 1960's, when Godtfred Kirk Christiansen was attempting to create a model for the house he was building out of LEGO bricks. To his surprise, he found he was unable to do it accurately, as LEGO bricks had an aspect ration of 6:5, rather than the European standard of 1:1. Rather than build his model out of scale, Godtfred had a uniquely sized line of parts moulded for him, that would allow him to copy his plans more exactly.

After some thought, Godtfred realised that LEGO bricks in this size developed specifically for architectural planning and modelling might actually be a successful and commercially viable product, and so Modulex was born.

Marketing Under LEGO, and The M20 System

First off, LEGO created a subsidiary company, Modulex A/S (although the name is reported to vary), specifically to sell Modulex products, the first of which, the "M20 System", was released in 1963.

The system consisted of a series of bricks including everything from windows to simple 2X4s and slopes, in addition to several more unusual items, such as unique baseplate foil, foil combs and cutters, and, uniquely for LEGO, solvent-based glue to stick models together after construction.

The line was intended for building in 1:20 scale (hence the name M20). M20 sets were available mainly in sets containing an assortment of bricks, but they were also available in bulk.

M20 didn't do very well with architects, who were, after all, the target audience, but it had became quite popular with industrial planners. So, in 1966, Modulex split into a separate company from LEGO (although they were still owned by the group), and released the Modulex Planning System, specifically designed for use by this demographic.

The Modulex Planning System, featuring bricks rebranded with an "M" logo on the studs, included plates, tiles, and blocks with letters printed on them.

After several further years of producing bricks, Modulex underwent a major change with the release of Interior 10, an architectural signage system. Although based on some of the ideas of the Planning System, Interior 10 and the 1979-introduced Exterior 500 finally brought the company away from the ideas of LEGO entirely.

In 1993, Modulex merged with ASI Sign Systems, and is currently the most successful signage company in the world, with subsidiaries in more than thirty-five countries. However, the LEGO-style planning system was not entirely forgotten, with Plancopy, introduced in 1982, and updated in 1994. Plancopy is still available to this day.

A display of the Modulex product 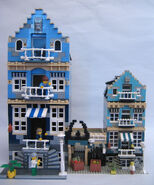 Comparison shot. On the left, 10190 Market Street, and on the right, a reproduction in Modulex
Add a photo to this gallery