Molly Weasley I is a Harry Potter minifigure introduced in 2010.

Molly Weasley I is the wife of Arthur Weasley and mother of the Weasley family. She's also the grandmother of James Sirius Potter, Albus Severus Potter, Lily Luna Potter, Rose Granger Weasley, Hugo Granger Weasley, Fred Weasley II, Roxanne Weasley, Molly Weasley II, Lucy Weasley, Dominique Weasley, Louis Weasley and Victoire Weasley as well. She lives at the Burrow with her husband Arthur Weasley and with her children. Harry is treated like part of the family by Mrs. Weasley whenever he visits. Her children include: George Weasley, Fred Weasley, Ginny Weasley, Ron Weasley, Bill Weasley, Percy Weasley, and Charlie Weasley. At the Battle of Hogwarts in 1998, she kills Bellatrix Lestrange with a well-aimed stunning spell and explosion spell at the evil witch's chest.

Before its release, Molly's minifigure featured the most promotion goofs, bested only by Argus Filch. The preliminary figure seen at the Toy Fair wore tan pants, as well as an apron design that matched the apron design on the torso. The teaser site picture shows her with dark red pants and lower apron. The shop image that LEGO produced for The Burrow gave her tan pants as well, but the apron pattern on her torso is orange rather than tan. The actual figure has orange legs, a tan torso, and an orange apron that matches on both the legs and the torso. She has the same hair as Hermione Granger's first version but it is orange instead of brown.

Molly Weasley on display at the 2010 Toy Fair. 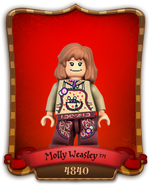 Molly Weasley in the 1st game