This article is about the animal. For the wood toy, see LEGO Monkey.

The Monkey is an Animal first introduced in 1989 for the Pirates theme. It has appeared in many other sets and themes since then as a new piece under Part 74499.

Monkeys appear in some of the Pirates capture cutscenes, in this game they have eyes which are colored white with pupils instead of them being brown like the rest of their body.

LEGO Indiana Jones 2: The Adventure Continues they can be mind-controlled by using black sleep.

Two monkeys appear in LEGO Universe. One of them is named Swabbie the Monkey, and one of them takes the name of Eeekums.

In The LEGO Movie, a monkey appears in a deleted scene.

In the Ninjago: Masters of Spinjitzu mini-movie, "The Tall Tale of Monkey Wretch," a monkey interacts with man named Monk before Nadakhan fuses the two of them, along with a toolbox, into Monkey Wretch. 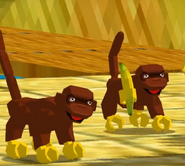