Brickipedia
Register
Don't have an account?
Sign In
Advertisement
in: Class 4 articles, Articles in need of expansion, Minifigures (theme),
and 2 more
English

Monster Scientist is a minifigure released in October 2015 as part of 71010 Minifigures Series 14.

The Monster Scientist takes on a cartoon-like appearance. He has a new headpiece that extends his head, indicating a large brain. Some large eyebrows and skin folds are printed on his oversized forehead. He has tufts of gray hair on the sides of his head, and large blue goggles with magnified pupils. His head depicts a crazy grin, and he has a mustache. His torso shows a lab coat with numerous pink splatters on it. His arms are dual-molded, giving him long black rubber gloves. His coat continues on to his legs, and the lower half of his legs shown black boots that match his gloves. He comes with a transparent pink flask with a fly printed on it. Presumably, this is the cause of the Fly Monster's transformation. 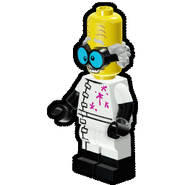